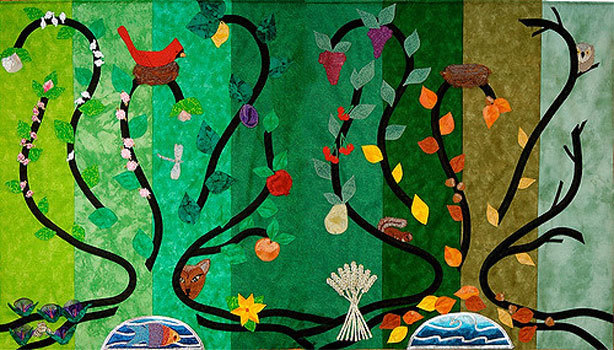 The church has its own calendar of seasons, which have nothing to do with the weather!  Most people know the significant Christmas holidays, but the church calendar is made up of weeks that help us prepare and then live out the meaning of those holy days.

The basic structure of the liturgical year is the four holy seasons:  Advent, Christmas, Lent and Easter. Outside of these holy seasons is what is called Ordinary Time .

In Latin, the name of this season is Tempus per annum (literally time during the year). This does not mean “boring time where nothing interesting happens.” The term derives from the word “ordinal,” as in “numbered”—and, indeed, the Sundays that fall within Ordinary Time are often designated in such ways as The Third Sunday After Pentecost, or The Second Sunday Before Lent. Ordinary Time refers to any period of time that falls outside the major seasons of the liturgical year.

Ordinary Time celebrates “the mystery of Christ in all its aspects.” The color of green is appropriate because it is the most ordinary color in our natural environment.

During this season it is also proper to emphasize that we are called to live out the Gospel day by day, one day at a time, not only in the notable experiences of life, but also in the mundane. “These Sundays remind us of a simple truth—”most time is ordinary time, neither crisis nor climax, tragedy nor comedy, just ordinary.”

The “new year” begins in the first Sunday of Advent – 4 weeks before Christmas.  It is a season of anticipation, expectation and preparation.  The Christmas “season” begins December 24th, celebrating the birth of Jesus and lasting 12 days until Epiphany on January 6.  The theme for the season of Epiphany is seeing God:  in the life of Jesus, in the world around us, in our own life journeys.

The season of Lent precedes Easter by 6 weeks; it is a time for reflecting on our lives, our challenges and our faith.  Holy Week concludes the season of Lent, with Palm or Passion Sunday leading to Holy Thursday and Good Friday, when the betrayal and crucifixion of Jesus are remembered.  Easter morning falls on the Sunday following the first full moon after the spring equinox, so it is a moveable feast, and has an impact on the dates of the seasons before and after it.  The season of Easter lasts 7 weeks until the day of Pentecost, 50 days later.

The season after Pentecost is usually called “Ordinary Time” and is the longest season of the church year, lasting until the “new year” begins again in Advent.  In recent years the United Church of Canada has marked a new season, the season of Creation, which begins the Sunday after Labour Day until Thanksgiving Sunday, which reminds us of our connection to the earth and our responsibility to live with respect in creation.  The last Sunday of the church year is called “Reign of Christ Sunday,” emphasizing that God’s grace, revealed in Christ, will ultimately overcome all injustice and suffering.