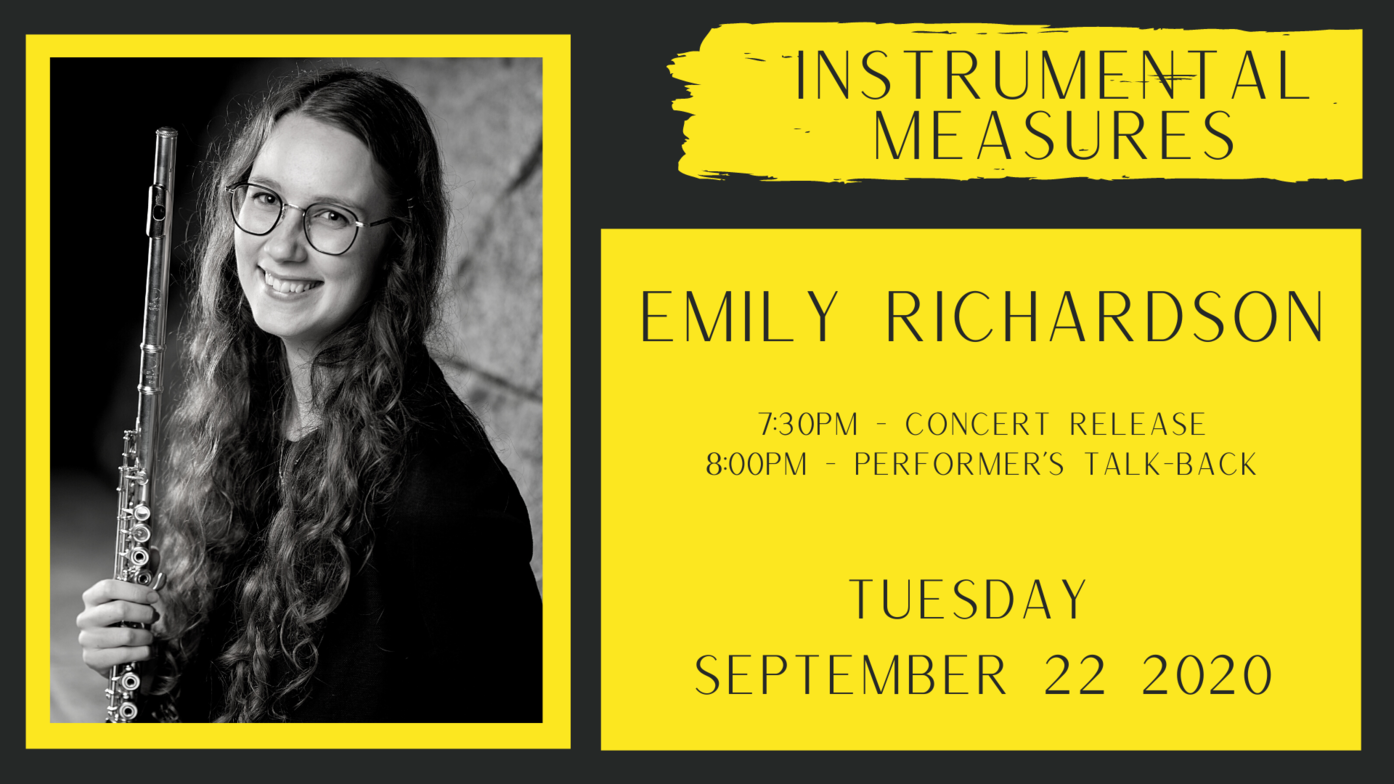 KnoxVan is proud to present our next free, virtual performer's highlight in the Instrumental Measures Performer Highlight Series Emily Richardson.

The flute has existed for hundreds if not thousands of years, taking many different forms across various cultures. Usually we think of the flute in an ensemble context, such as the fluttering bird in an orchestra or the soprano voice in a wind quintet. However, flutists are fortunate to have a huge variety of music for the instrument in a solo context, spanning from the Renaissance to the modern day, which I will be featuring through my program. In these three extremely disparate works, each from different eras, I will have the opportunity to show how expressive and exciting the flute can be on its own. Despite the pieces’ differences, it’s also possible to hear the connections that bridge them and tie them together.

The first work is the Sonata in A minor by Carl Philipp Emmanuel Bach, the second son of Johann Sebastian Bach. This sonata, composed in 1747, was likely inspired by J.S. Bach’s own Partita in A minor for solo flute. For the time, the Partita was extremely unusual in its range and virtuosity as well as instrumentation; usually, solo works were for strings or keyboard instruments. In the Sonata in A minor, C.P.E.’s quirky musical character quickly expresses itself; there are sudden, unexpected character shifts, harmonic changes, and dynamic contrasts. At the end of the first movement, there is a short cadenza, which I wrote myself. Writing or improvising cadenzas would have been standard practice at the time but isn’t frequently done today. The following two movements after the slow and sombre opening are dance-like and jovial, though still with lots of quirky twists. Altogether, this sonata is extremely fun because it’s hard to predict what will come next!

The second work is Air by Japanese composer Tōru Takemitsu. Written in 1995, it was the last piece Takemitsu composed before he passed away the following year from cancer. Takemitsu dedicated it to his long-time friend and collaborator flutist Aurèle Nicolet for his 70th birthday. Takemitsu took a great deal of inspiration from nature and was very interested in the ways he could combine traditional Japanese and Western music. His writing style, especially in his flute works, was greatly influenced by the shakuhachi, a Japanese bamboo end-blown flute. Throughout Air, two voices speak as if in a call-and-response. In the end, the opening melodic “echo” material is repeated once more, as if the two voices have finally been reunited. It uses some extended techniques for the instrument including harmonic fingerings, which change the note’s timbre, and flutter tonguing.

The final work on my program today is Eugène Bozza’s Image, composed in 1940. Bozza was a 20th century French composer, violinist, and conductor who studied at the Paris Conservatoire. The Conservatoire was hugely influential in the development of modern flute playing, employing teachers that included Paul Taffanel, Philippe Gaubert, and Marcel Moyse (who all wrote numerous books still in use by flutists today, including myself!). Image was dedicated to Moyse, the current professor at the time. It is extremely virtuosic, featuring large leaps like in the C.P.E. Bach. Additionally, it includes extended techniques like in Takemitsu’s Air. Overall, Image alternates between two contrasting characters; one is very free and improvisatory, while the other is spritely and dance-like.

Emily Richardson is currently studying under the guidance of VSO principal flutist Christie Reside as part of the Masters of Music program at the University of British Columbia, where she completed her undergraduate degree in 2019. Originally from Calgary, Emily began her early flute studies with Mary Sullivan at the Mount Royal Conservatory, enriching her experience through joining its Academy program. She has attended summer music programs at Domaine Forget, Oxford, and Carnegie Mellon University, and she was a member of the National Youth Orchestra of Canada in 2018 on their tour of Eastern Canada, Germany, and Scotland.

Emily has performed with a number of ensembles, including the UBC Symphony Orchestra, Vancouver Metropolitan Orchestra, and Symphony 21. She is a member of Artemisia Duo, which has been featured in local concert series such as the Roedde House Museum series. In addition to her ensemble playing, Emily is passionate about contemporary music and working with composers, and has premiered numerous new works. Through all she does, she ultimately aspires to share her love of music with others.

Our Community Partner for this performance is proudly Metro Theatre, a live theatre composed of hardworking theatre professionals and a dedicated team of volunteers in Vancouver. They will open this years season with Charly's Aunt starting on Septemebr 25 with COVID safety measures in place. More information can be found on their website