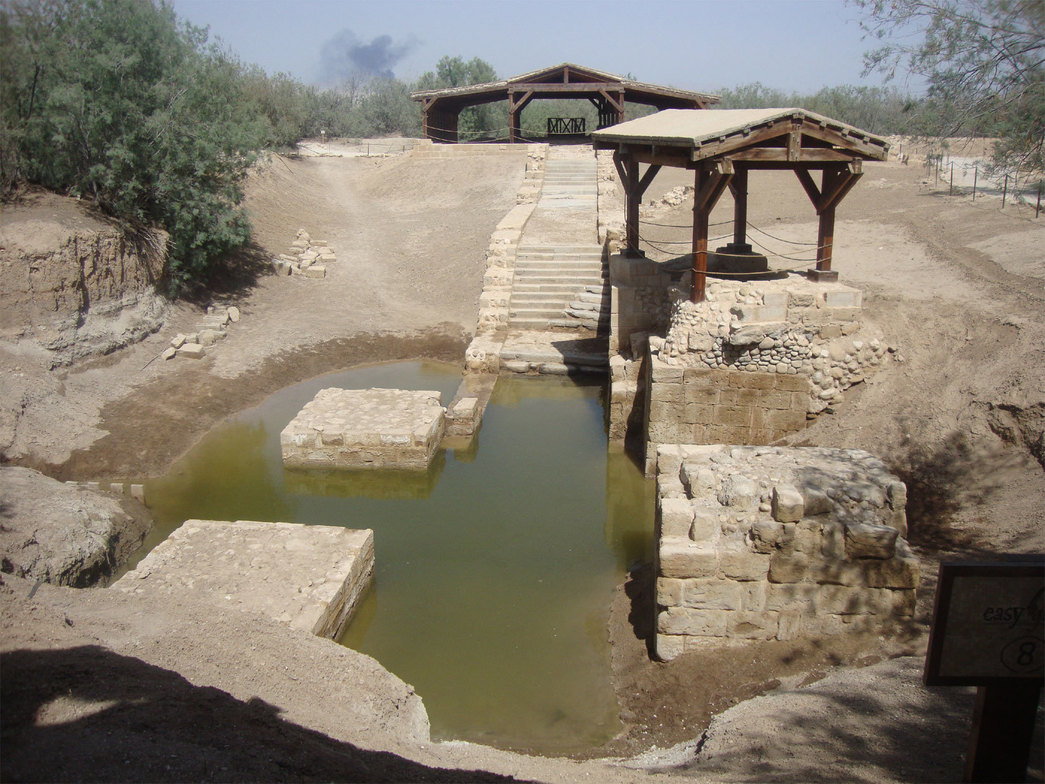 John the Baptist has been preaching, and baptizing, calling people to repent, to change their ways, to turn around… the voice of one crying out in the wilderness.  He’s been questioned, challenged by the authorities, asked why he’s been baptizing if he’s not the Messiah, nor Elijah returned, nor the prophet (none of those whom they have been taught would come to redeem them.)

John has said he does what he is called to do, but another will come who ranks ahead of him.  He’s not putting himself down, but he knows his own calling, and he is pointing to another who is greater: to Jesus.

John’s gospel, it is widely considered, was written for a community of Jewish Christians in the Diaspora.  Their world had been turned upside down.  Everything had changed.  Diaspora — think refugees — displaced people — 3 generations after the life, death, and resurrection of this Jesus.  This baptism event we referenced in today's reading is a retelling of a story they have heard, passed down in love, the story rooted in their Jewish heritage.  This is the story that got them ousted from their fellow Jews.

John’s gospel is all about revelation and proclamation… who is this Jesus?  So after he has baptized Jesus, according to this gospel, John the Baptist tells what he has seen and heard.  John shouts it out!

Who is this Jesus?  Son of God, Lamb of God, Messiah, Anointed One — the one who turns the world upside-down when it has already been turned upside-down… so the one who redeems their world and restores them.  The one who changes everything, even giving Simon a new name - Peter - the rock.

John the Baptist tells quite simply what he has seen and experienced.  He tells his story to two of his own disciples, and they see Jesus, and recognize, or feel his pull, and follow him.

I’m interested in their exchange of questions.  First Jesus’ question: “What are you looking for?”

I recall the first time I knew Jesus in a personal, real, making-a-difference-in-my-life kind of way.

I didn’t hear his question, “What are you looking for?”  But I sure answered it!  I was looking for a friend, someone I could tell my story to, my depression, my fear, my questions and longing, someone who would hear me and not be overwhelmed.  It was in my searching, in the midst of my desperation, that I found Jesus, or Jesus found me.  And I’ve told and retold my story… many times!

John tells his friends, “I myself have seen and have testified that this is the Son of God.”  John could have been forgiven for not telling his own disciples this news.  No one wants their group to disperse, to leave them.  But John doesn’t keep quiet.  When he and his friends see Jesus, he testifies to what he knows and believes.  And these two friends, having been with Jesus for a day, (apparently a life-changing day) do not keep the good news to themselves.  Rather, they also spread the word… and the group who would become Jesus’ best buddies — his disciples — his followers began to gather around him.

Indeed, when something big happens that changes us — it’s big news — that bursts from us!

John the Baptist tells his story, “I saw the Spirit descend on him!”

Andrew tells his story, “We have found the Messiah!”

I tell my story, “In the midst of my search for a friend who would save me from my depression and my fear, Jesus came to me, even though I had not called out his name, and he brought light into my darkness.  Over the years, he’s invited me to sing his story, and to preach his story, and to be with others as they search out their own stories.”

Maybe the best part of my story is my realization that the life-changing, life-saving truth is not about my faith in God, but about God’s faith… God’s faith in me, and in you, and in all of creation.  This is the amazing good news that is both surprise and shock!

Genesis, for instance… we’re told in Genesis of how God continually risks… giving humans free will is an immense risk!  All of creation is given to us to have dominion over, as the Bible tells us.  All of creation is entrusted into our care.  God tells the first humans, “Care for creation as I would myself.  I believe in you.”  If someone leaves you in charge of something very important and precious — the world — for instance, I would say that someone has faith in you!

I’m not a literalist.  I hear in the bible the stories and words that people used in ancient times to speak of their profound experiences of the Holy… God’s faith in ordinary people… Abraham and Sarah, Moses, David, Deborah, Mary, Joseph.

Today’s gospel tells the beginning of Jesus’ calling his disciples.  They were a most unremarkable crowd… not even ordinary… some were outcasts, definitely of questionable character in the eyes of the religious folk of the day… beginning with poor, uneducated, rough-living fishermen, like Andrew and Simon.  Then there was Matthew, a tax-collector for heaven’s sake!

We’re told Jesus’ best buddies often misunderstood him.  And ultimately they all betrayed him when the going got really rough.  They certainly were the very last persons that many would have trusted.  Yet it was to these very people that Jesus said, “Follow me!”  He chose them, relied on them, had faith in them to continue his work.  And they grew into the task given them because of the faith Jesus had in them.

Jesus believed in them, and that enabled them to believe in themselves.  In the end, those who had cowered in fear, and denied they even knew him, were so filled with the faith of Christ that two thousand years later we still know the stories they told of their experiences.  They told their stories.

Simon is a prime example.  Simon was a poor, hard-talking, rough-living, impetuous fisherman.  Most people would not have looked on Simon as having great potential as a leader of people.  Then one day his brother, Andrew, introduced him to Jesus.  And Jesus saw him differently.

Jesus saw who he was and who he could and would become.  It was Jesus’ faith in Simon that enabled him to become the foundation, the rock on which the church of Christ would be built…  I’m sure there were times when he gave up on himself.  At the last he probably wanted to hide even from himself.  But Jesus had faith in him.  God did not give up on him.

God has not changed. What was true for them is also true for us.  God believes in us.  God does not give up on us.  Just think about this: the Creator and Sustainer of the universe believes in each one of us!  How dare we not believe in ourselves and in each other?

God often has more faith in us than we have in ourselves!  We too easily lose faith in ourselves.  We see only who we are, like Simon, but the Holy One sees who we can become…

Hear the words of Jesus:

“So you are the people of Knox United Church.  You will be a people in whom my love can be experienced.  I have called you.  I have faith in you to carry out my work.  You can do it.  I believe in you!”
What We Do
Knox WORSHIP SERVICES
Tweet