A Letter to Mary 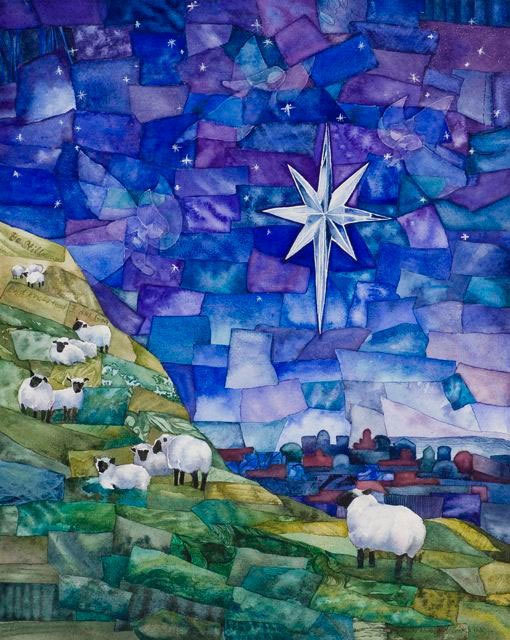 I intended to address this letter to “My Dearest, Beloved Mary,” but feared that at this point you would welcome only the barest of salutations from me. Maybe you have already torn these words and the papyrus upon which they are written into a thousand shreds and scattered them with the excrement that flows in the gutter. Who would blame you? I have been a fool. Worse than that, I have been an arrogant fool.

I have much more to write about you and me...but first I want to convey my deep relief and joy at the news that you are well and there with your cousin, Elizabeth, and her fine husband, the priest, Zechariah. The morning after you left, your father came to my house in a rage. He demanded to know where you were and what I had done with you. You won’t believe this, but he even broke my nose with a wooden bowl. Each time I touch it, I feel its thick pain. It makes me think of you. I’m glad he broke it!

Your mother came next, screaming like an eagle. Your father and I were rolling around in the red dust like a couple of synagogue boys. She grabbed your father by the ear, pointed an ominous finger at me, and ordered us inside the house. Quite a crowd had gathered. I’m sure that before I wiped the blood off my face, Mrs. Zebedee’s tongue had gone wagging like a dog’s tail around the village telling everyone what had happened.

Your mother told me that when they woke up that morning you were gone from your mat. I said that you had probably gone to the hills for the day. After all, since you were a little girl, that is exactly where you went whenever you were angry—to watch the spiders, you’d say. But my heart began to sink as I sensed that this was different. They said you were crying when you got home the night before and demanded to know what we had talked about.

I told them I had called off our wedding—and why. I was so shocked and hurt when you told me that you were pregnant, Mary. My heart turned to ice. And I felt insulted when you said that you believed that it was God’s will that this child, who is not mine, would change the world, liberate the people, care for the poor. It was as if you, an ignorant peasant girl, (I know this isn’t true but that’s what I was thinking) were calling me, a man, a religious elder, and your husband-to-be, a fool. My pride opened my mouth. I even convinced myself that I was doing the noble thing. Quietly calling off our engagement seemed to be the kind thing, the honorable thing. After all, everyone knows that I do “the right thing” to a fault. I would face the ridicule from the likes of Mrs. Zebedee, even from my own friends, but they would also say, “Isn’t he kind when he could have had her stoned to death?”

I was there when they stoned Deborah, Jacob’s wife. I still have nightmares. It was there, when Deborah was stoned, that I first realized that you were special among women and girls, and that I loved you. How old were you, 10 or 11 years? You must have sneaked out of the house—a pattern for you it seems. By the time your mother arrived at the stoning, you were screaming and tearing at the robes of the elders who were throwing the rocks. I was hoping that your mother would drag you away before...well, before Deborah died. So, I felt noble and honorable, sparing myself that horror.

I am glad your parents came. They told me of their shame too. They told me what they had always said to you about girls who got pregnant before they were married. People say things like that, Mary. They don’t really mean it. Not about people they love. Your father sobbed. “Cast the first stone? How could I say such a thing to my little girl?” Those are his exact words.

I was 12 years old when you were born and I watched you grow up. When your father and I agreed that you would be my wife, it was the happiest day of my life. I know—and you were right to say it—we men treat women like cows or donkeys, the way we wheel and deal over you. But, I don’t mean I felt happy in the same way I would be if I had made a good bargain with an animal. I mean I felt the deep joy of the completion of something I had always dreamed would come to pass. You helped me understand what the Torah means when it says that God saw the first human’s loneliness and said, “It is not right that this one should be alone,” and from a rib fashioned the one who would complete him. You, Mary, complete me.

So, when you told me that you were pregnant, I felt as though my whole life, my dream, everything had been ripped from my hands in an instant. I was angry. I didn’t understand. I still don’t understand completely, but I’m willing to try.

You see, the truth is that I really am the sort of man who does the right thing, not because of what the neighbours will say, but because that’s how I am. When one of my customers overpays me, even a coin or two, I return it. If I find something that doesn’t belong to me, I could no more keep it than turn water into wine. That’s just how I am. I think that it is doing the little things right that leads us to God. It’s like practice for when the big thing comes along.

The big thing, Mary, is to step through whatever gate God opens to us. You and this child are the Creator’s gate for me. What else could account for this love that feels like drunkenness, but which helps me see the world more clearly, more beautifully, than ever before? Our love, this child, will lead us to both joy and suffering. Love always does. To deny that love, however, would lead to emptiness and to death.

Mary, please come home! Give my regards to Elizabeth and to Zechariah and wish them well with their own surprising birth, but please come home. Already I am under pressure to leave for Bethlehem in order to fulfill my census obligations. I would very much like to make that journey, and all journeys from now on, with you. Together we will find the way.

With all my love, Joseph.